The Federal Reserve Banking system is a form of slavery.

Here's  my take on the political crisis and economic inequality we have found ourselves in here in 2017.

We have been told forever it seems, that to solve a mystery, follow the money. 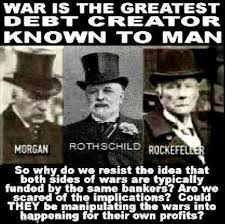 The next economic crisis was the War of 1812 caused by England imposing trade restrictions between USA & France. As well the Brits were jealous of America's prosperity and wanted to maintain British economic superiority.

The Civil War was not only about slavery but it created an economic storm that is rather telling. Lincoln needed money to fund the war but British banks would not lend to him, so he went around them and started printing his own currency that became known as Green Backs, a term still used today. Creating his own currency the north won the war and became prosperous. I feel that creating this currency resulted in his assassination as the banks wanted the ability to create their own money via fractional reserve banking.

From the end of the Civil War many banks went bust because of fractional reserve banking and greed.  This of course could not stand as citizens were complaining loudly. So in 1910 an effort to stop these constant runs on banks a plan for a central bank was drafted. Drafted in a secret meeting on Jekyll. In attendance was Senator Nelson Aldrich, Frank Vanderlip of CitiBank, Henry Davison of Morgan Bank and Paul Warburg of the Kuhn, Loeb Investment house.

In 1913 Woodrow Wilson signed into law the Federal Reserve Act of 1913.

The bankers plan wanted a Central bank owned by bankers with the ability to essentially create money out of nothing. I am leaving out a lot of details but in essence they created a debt based economy where money is created thru debt/loans. This is really a ponzi scheme, and the underlying mechanism that has created this gross inequality we have today. 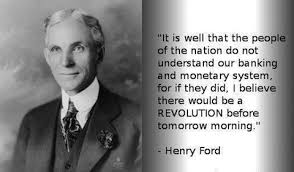 In this debt based economy money is created when we go and borrow money and is destroyed when we pay it back. The problem is the banks want interest on the money they loan. Banks fail to mention that money for the interest was not created when you take out a loan. So where do you get the money to pay the interest. Somehow borrowers have to pay back banks money they did not have in the first place plus interest. In this system someone has to loose & or the economy MUST grow enough for people to acquire by what ever means enough money to pay the interest & principle.
This is also the reason our Dollar buy less and less as years go by.

On June 4 1963 Kennedy signed an executive order for the Treasury to issue Silver certificates. Creating money via the Treasury as dictated by the Constitution could not tolerated by the Federal Reserve Bankers. Some believe this is the reason for his assassination.

Here is one theory I borrowed from Wikipedia.
One theory was penned by Jim Marrs, in his book Crossfire, presented the theory that Kennedy was trying to rein in the power of the Federal Reserve, and that forces opposed to such action might have played at least some part in the assassination.[16][17][18]Marrs alleges that the issuance of Executive Order 11110 was an effort by Kennedy to transfer power from the Federal Reserve to the United States Department of the Treasury by replacing Federal Reserve Notes with silver certificates.

Considering the history from King George days till now and the efforts of Bankers to install a central banking system the theory may be plausible.

The Trump administration is continuing efforts to protect banks control over citizens by enacting legislation or executive orders that remove the peoples right to sue banks via class action for predatory practices.

The 1% own the Federal Reserve. They want total economic and political control over We the People degrading us to slavery.

Posted by GeeWeedy at 3:31 PM No comments: