The Brainwashing of America

Americans don't want to hear this but it's high time they and would do well to pay careful attention. 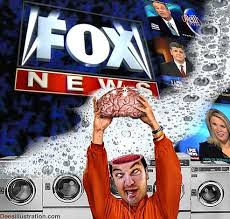 This story is fifty years in the making. It begins November 1967 when my parents and I immigrated to Canada from the San Francisco Bay area. I was 14 years old as a freshman in high school. To say the least it was a shock moving from California to Saskatoon Saskatchewan.

It goes without saying things were different. I was treated like an novelty at first is some ways. Canadians were more than happy to tell me the differences between USA & Canada. Many took exception that I was an American including some teachers. In a typical Canadian and polite way they chastised my lack of  general knowledge of Canada. They took pride in knowing more about the USA than those stupid Americans knew about Canada. In retrospect it was the best thing for me, as I was really a stupid American then and I needed to learn something about my new home.

It took me about a year to begin understand that maybe just maybe, America was just part of the world but not it's ruler. But I was still being a proud defensive American and I am sure I put my foot in my mouth often. Thank God I was in Canada and they were polite enough to forgive me.

One summer I went on a fishing trip to norther Saskatchewan and Manitoba with a friend and his father who was an advertising salesman selling ads to all the hunting and fishing outfitters. Fishing was great making it a memorable summer.

This was the summer where I learned exactly what the term Ugly American was referring too. We were at a small native village call Pelican Narrows. It sticks out because the first road to the town had just been built and the local kids had never seen a Plymouth Fury station wagon with gold metal flake paint and they were literally climbing all over it so that we had to chase them away to drive. It was explained that even though they had seen boats, planes, snow mobiles, road machinery and such they had never seen a station wagon.

In the center of Pelican Narrows was a Hudson's Bay store. It looked like the original rustic outpost of the 18th century with an equally rustic sign. There were a few steps leading up to the porch where some loud Americans were chatting. You could tell they were Americans with their heavy southern drawl. We walked up to the steps to explore the store and one of them got the idea they should have their picture taken in front of the store. They then demanded that one of us "Boys" take their picture and right now dammit like we were a piece of property. When we started to walk away they offered to pay us! Which was even more repulsive. They were oblivious to their rude behavior. Ugly Americans.

What I realized years later is that those guys were really brainwashed as most Americans are into believing that since they were Americans and America is #1 they had permission to be complete assholes. American propaganda is so good it is invisible to all but the most evolved.

How can I be sure of this? When have lived in a foreign country for 50 years and upon hearing the American national anthem on TV or sporting event, promising yourself to hold back tears and cannot, this is a sure sign that you have been brainwashed. My irrational unstoppable emotional physical response evoked by a song for the past 50 years makes me conclude that for better or worse I have been brainwashed. And so have you.

Realizing a hidden truth like this is makes one question, well, just about everything you have been taught is right. A question these days we should be asking daily.

But how?  American Propaganda. I know Americans don't see it, I didn't. Most Americans are too self absorbed, busy and trying to make ends meet to notice. I don't think it matters whether the propaganda was in a master conspiracy plan or it just happened as the natural course of Nationalistic evolution. What matters most is that you are aware that it is happening.

I eventually evolved to know I was brain washed and even now subject to it's patriotic tugs to this day.

So how does this happen? Well, I have not done a scientific study of this but here is my take. First 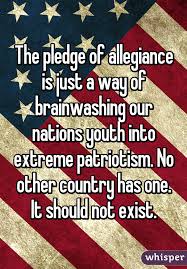 think of all the years in school you were forced to recite the pledge of allegiance. Then think of any concert, sporting event. The color guard brings out the Stars and bars and we have to cross our hearts, stand and then sing the national anthem and everybody has those patriotic tears. This happens over and over and over and over. Did you know that USA Military actually pay the NFL to be able to supply a color guard and military pomp at the games. Why is that? All in the name of patriotism. The constant bombardment year after year slowly seeps into your mind making you accept this as normal, without question. Propaganda exploits our genetically programmed desire to belong. Without the balance of independent rational critical thinking we risk "Alternate Facts" becoming accepted as truth.

This unquestioned patriotism is extremely dangerous as we are now finding out. The conservative movement with their rhetoric of fear, hate and blatant greed are the result of  the Brainwashing of America.